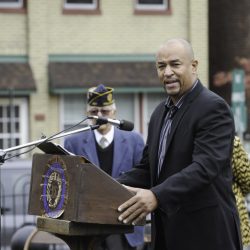 His leadership experience is extensive, covering some of the highest levels of the military, including work as a mission planner, planning multiple missions for the White House, Joints Chiefs of Staff, National Security Agency, and NASA. He also has high-level recruitment experience in the Air Force Recruitment Service, recruiting physicians, dentists, pilots, and engineers over the course of two wars.

This past November, he delivered the keynote address at Phillipsburg, NJ’s annual Veteran’s Day ceremony.

While he did complete two degrees while on active duty, he notes that completing his education was a major challenge for him. When asked how he was ultimately able to succeed, he noted that his “refuse to fail” attitude helped him balance 10-12 hour work days with his education.

Cameron holds a Bachelor of Arts in Social Science from Chapman University in Orange, CA and a Master of Arts in Education from Trident, both achievements he considers among his most fulfilling experiences while in the military.

And what are some of his other standout moments as a service member?

If you’re located in the northeast portion of the United States, keep an eye out for Valentine at your base or in your community.