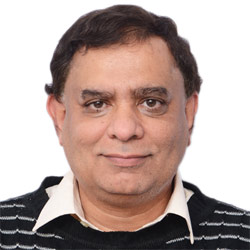 In my role as Faculty at Delaware, I had taught a General Computer Science for Engineers Course using Matlab and C++, which was a rigorous course for freshman engineering students. I supervised two teaching assistants for the course who ran four lab sections of twenty students each. I pursued a teaching strategy that encouraged student involvement as well as demonstration of their content knowledge.  The teaching delivery included providing a highly organized lesson, questioning students and providing examples. This added to the energy of the room over the course of the quarter, and made the instructional time valuable and useful to the students. While general techniques, skills and methods are important, the enthusiasm created by a teacher is an essential characteristic to possess. Students have indicated that they have benefited from my enthusiasm and knowledge that were a result of my preparation, efficiency and flexibility where I often modified course contents to meet student needs. I used various sources such as alternative textbooks and the Internet to cover relevant material in the class. Teamwork and collaboration has always been encouraged in assignments and projects. Any scientific endeavor is rarely done in a vacuum; therefore it is to the student’s advantage to learn the benefits of collaborating. As an Online Instructor, I have made myself accessible to the students via phone, email, holding office hours and setting appointments when necessary. When email communications are not sufficient, I have conducted Whiteboard sessions which have been productive and have aided considerably in a student’s learning process.

My research has focused on the mathematical modeling of biochemical pathways using the power law representation and the design and implementation of a pathway database using Entity-Relationship modeling. I have published extensively in peer-reviewed journals and presented at academic conferences throughout the United States.

Programs
Publications
Presentations
Favorite Quote
I can't change the direction of the wind, but I can adjust my sails to reach my destination.
Honors & Awards
2012, 2009 "Marquis Who's Who in America".

B. Tech (Honors) in Chemical Engineering
Associations
ISCB
Areas of Expertise
Dr. Lall’s area of expertise includes (a) modeling of biochemical pathways (b) design and implementation of metabolic databases (c) courses in the areas of engineering mathematics, statistics and calculus.


Professional Experience
Dr. Lall is credentialed with Ph.D in Chemical Engineering and his research has involved modeling of the pyruvate metabolism pathway in Lactococcus Lactis from time-series data using the power law representation with linear and non-linear regression. A statistical analysis was performed to obtain confidence levels of kinetic parameters and using them to enhance ethanol production. He was involved with the development, design and implementation of a relational database in Oracle 8i for a biochemical database using Entity-Relationship modeling.  SQL statements were used to perform complex queries that yielded information for building flux balance models. Within engineering mathematics, areas of emphasis have included the solution of first order, second order, higher order, systems of differential equations and matrix algebra. Applications of differential equations in the fields of science and engineering have included decay of radioactive compounds, change of salt concentration in a mixing tank and determination of current or charge in an electric circuit. Matrix Algebra has included methods of Gauss elimination, rank, inverse, eigenvalues and eigenvectors. Within statistics areas of emphasis have included probability, measures of central tendency, variance and frequency distribution, sampling methods and regression analysis.