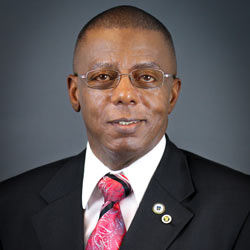 Clifford “Cliff” Milton-Stewart, USMC (Ret) is Trident’s Regional Manager of Strategic Military and Community Relations in the South East Region. Clifford is a 30 year veteran of the US Marine Corps serving in roles such as Supply Chief, Operation Chief/Officer, Drill Instructor, First Sergeant and Command Sergeant Major in the Infantry Battalion, Marine Corps Recruiting Command, 2nd Marine Expeditionary Command and Marine Forces Command (Atlantic). While serving the Marine Corps, Cliff earned two Legion of Merit awards, one Meritorious Service Medal, three Navy and Marine Corps Commendation Medals, one Navy/Marine Corps Achievement Medal and various campaign and unit awards. Cliff is an active member of the Marine Corps League, The Salvation Army Emergency Disaster Team and a Board Member for the Salvation Army in his community. Cliff has worked in higher education as an Outreach Liaison for the past eight years after retiring from the US Marine Corps.

Cliff believes that education is an important building block for the future of all Americans. In addition working in Higher Education and earning a Bachelor of Science in Management after retirement from the military, he is currently working to complete a Master of Science in Leadership.