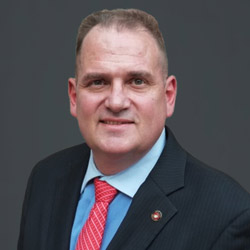 Doug Harris is originally from Chula Vista, California, but has lived off and on in Arizona for a majority of his life. He joined the Marine Corps Reserve in 1985 in order to serve his country and assist in funding his education. After graduating from Arizona State University in 1990 with degree in Political Science, he transferred to active duty. In October 2000, he departed the Marine Corps as a Gunnery Sergeant.

Doug started working with military students pursuing higher education in December 2000, holding numerous internal positions, which include Enrollment Advisor, Enrollment Manager, Director of Enrollment. In November 2011, he transferred to the external division becoming their Regional Director of Military Relations. Since August 2017, he has been with American InterContinental University and is responsible for external military and veteran relations for the western half of the United States. In addition to his undergraduate degree, Doug has a Master of Business Administration and a Masters of Management in Human Resources Management.