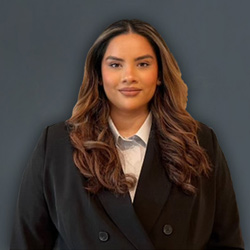 Melanie Sanchez Leckie is Trident’s Regional Manager of Strategic Military Community Relations. Melanie is an Air Force Veteran who firmly believes that education is the practice of freedom, the greatest equalizer. Melanie is an energetic, fearless, and motivated leader who has advocated for higher education for all branches of service and their families. She also is a first-generation American whose parents are from the Central American country of Nicaragua. Melanie also learned Spanish as her first language and was raised in a household where education was the priority.

Melanie completed her undergraduate while being on active duty and deploying out of Hurlburt Field, Florida. She earned a Masters in Business Administration with a concentration in logistics from Trident University International while traveling to the continents of Europe and Africa and being an active-duty Air Force spouse.

Favorite Quote
“Education, then, beyond all other divides of human origin, is a great equalizer of conditions of men—the balance wheel of the social machinery.” Gerardo Gonzalez (2001)