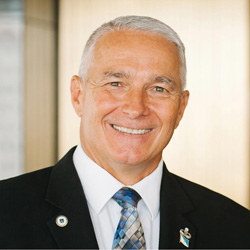 “SEAC(r) Joe Gainey is a Trident University graduate and was the first Senior Enlisted Advisor to the Chairman of the Joint Chiefs of Staff.”
Education History

William J. (Joe) Gainey was the first Senior Enlisted Advisor to the Chairman of the Joint Chiefs of Staff (SEAC). He retired after 33.5 years of service to his nation on April 25, 2008 with the rank of Command Sergeant Major. Joe served as NCO for 32 years, 13 of which as a Command Sergeant Major (CSM).

Joe was the first Senior Enlisted Advisor to the Chairman of the Joint Chiefs of Staff, a newly created position established to advise the Chairman on matters of professional development of enlisted personnel for a joint environment. He was the first person selected to serve in this position beginning October 1, 2005 making him the most Senior Enlisted Noncommissioned Officer (NCO) in the Department of Defense.

Joe enlisted in the Army under the Delayed Entry Program in 1974 and entered basic training at Fort Knox, Kentucky on 17 June 1975. Since then, he has served in every leadership position in the United States Army.

After retirement Joe worked for the Joint Improvised Explosive Device Defeat Organization (JIEDDO) located in Washington DC for approximately one year before establishing WGainey Consulting as an independent consultant.

Joe has been married to the former Cindy Chunn of Mississippi for 34 years.