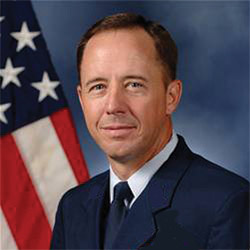 Hall of Distinguished Alumni - Class of 2007

Chief Master Sergeant Anthony L. Bishop was the Command Chief Master Sergeant for Pacific Air Forces, Hickam Air Force Base, Hawaii. In that position, he led the 45,000 Total Force enlisted Airmen of Pacific Air Forces. His responsibilities included advising the PACAF commander on all matters affecting the training, professional development and effective utilization of assigned enlisted personnel and coordinating with the headquarters staff, commanders, and senior personnel on administration and implementation of command policy.

Chief Bishop was born in Boynton Beach, Florida and is a 1980 graduate of Iuka High School, Mississippi. He entered the Air Force in November 1980. His background included various duties in aircraft maintenance, First Sergeant at the squadron, group, and headquarters levels, and Command Chief Master Sergeant at the wing and MAJCOM levels. Chief Bishop retired from active duty on December 31, 2009, and relocated to Garden Ridge, Texas.