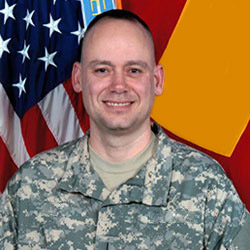 CW4 Jones was born on December 15, 1973 in Houston, Texas. He entered the Army in June of 1992 and attended Basic Combat Training at Fort Jackson, South Carolina. After completing Advanced Individual Training (AIT) he was assigned to Echo 2-7 ADA as a Patriot Crewmember at Fort Bliss, Texas where he deployed to both CENTCOM and the Korean Peninsula within an 18 month period. Eight months after returning to home station, he re-deployed as a Section Chief with Alpha 1-43 ADA at Kunsan, Korea. Following that assignment and the Primary Leadership Development Course (PLDC), he served as Instructor/Writer and Platoon Sergeant/Academics Branch Chief for Bravo 3-6 ADA at Fort Bliss, Texas. After completion of Basic Non-Commissioned Officer Course (BNCOC) in 1998, CW4 Jones was selected as an ADA Warrant Officer in MOS 140E (Air and Missile Defense Tactician/Technician). In 1999, he completed Warrant Officer Candidate School (WOCS) at Fort Rucker, Alabama. In 2000, he completed Warrant Officer Basic Course (WOBC) at Fort Bliss, Texas where he was assigned to Delta 1-1 ADA as a Battery AMD Tac/Tech and deployed in support of Operation Iraqi Freedom (OIF). He was commissioned to Chief Warrant Officer 2 in November 2001 and was assigned to Echo 6-52 ADA in Ansbach, Germany in 2003.