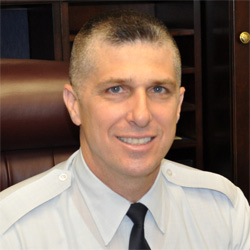 Hall of Distinguished Alumni - Class of 2010

Chief Master Sergeant Eric R. Jaren serves as the Command Chief, Air Force Materiel Command, Wright-Patterson AFB, Ohio. As command chief, he is the primary advisor to the commander and senior staff on all matters affecting education, development, training, readiness, effective utilization and quality-of-life of the command’s 13,431 enlisted Airmen and their families. He coordinates with headquarters staff, commanders, and senior leaders on development and implementation of command policy affecting the Command’s 11 centers and 31 wings & wing-equivalent directorates extending across 67 locations. He also serves as the command functional manager for 11 command chiefs, 25 group superintendents and 64 first sergeants.