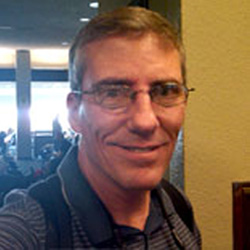 Martin W. Glenn is an Antiterrorism Analyst for Camber Corporation; he has been working in this position since July 2009. Martin W. Glenn was born in Lexington, Kentucky and raised in St Louis, Missouri. He entered the United States Army in June of 1979, attended Basic Training at Fort Leonard Wood, Missouri and Advanced Individual Training at Ft Huachuca, Arizona where he was awarded the MOS 96B, Intelligence Analyst.

Upon completion of Advanced Individual Training he was assigned to the 1st BDE (1st Infantry Division, Fort Riley, Kansas) as an Intelligence Analyst. While assigned to 1st Brigade, 1st Infantry Division, he deployed to Germany for a REFORGER exercise, completed a rotation to the National Training Center, and worked at 1st Battalion, 18th Infantry and conducted a deployment exercise with 1st Squadron, 4th Cavalry Regiment.

In 1984, he PCS’d to Germany and was assigned as an Intelligence Analyst with 2nd Battalion, 33rd Armor (3rd Armor Division) where he was involved with numerous exercises, REFORGERs, and the M1 Abrams transition. In 1986, CSM Glenn helped the Battalion transition to a COHORT Battalion and move to Fort Hood, Texas where it was re-designated as 3rd Battalion, 32nd Armor (1st Cavalry Division). While assigned to this Battalion, CSM Glenn helped develop a battalion counter-reconnaissance plan and deployed for a second time to the National Training Center.

In 1988, Marty Glenn PCS’d to Panama and was assigned as an Intelligence Analyst with 1st Battalion, 508th Infantry (ABN) (193rd Infantry Brigade, Panama) where he prepared for and conducted combat operations with the Battalion during Operation JUST CAUSE as part of Task Force Bayonet. After Operation JUST CAUSE, he deployed several times with individual infantry companies conducting parachute assaults into the David province in support of Operation PROMOTE LIBERTY.

In 1995, Marty Glenn PCS’d back to Panama and became the 1SG for C Co., 470th Military Intelligence Brigade. His company was responsible for source operation and monitoring Panamanian demonstration along the Canal Zone for U.S. force protection. As the Brigade began to deactivate, Marty Glenn took the position of 1SG for D Co., 204th Military Intelligence Battalion (Low Intensity) at Fort Kobbe, Panama and conducted Counter-Narcotics Operations throughout Central and South America.

In 1998 and 1999, Marty Glenn served as the Senior Intelligence Observer/Controller for the Joint Readiness Training Center at Fort Polk, Louisiana. He was responsible for briefing and advising Light Infantry Brigade Combat Teams on NCO leadership issues as it affects the I-BOS as well as coaching, teaching, and mentoring the Military Intelligence units on NCO leadership issues and TTPs.

Marty Glenn graduated from the Sergeants Major Academy, Class 50 in 2000. He was then assigned as the CSM for 319th Military Intelligence Battalion (OPS)(ABN) at Fort Bragg, North Carolina, where he deployed numerous Soldiers to Bosnia as well as Afghanistan, Pakistan and Iraq in support of the Global War on Terrorism. In 2003, Marty Glenn was selected as the CSM, 525th Military Intelligence Brigade (ABN). The Brigade deployed 1,500 Soldiers in combat operations to Iraq in support of OIF 04-06 in November 2004 to November 2005.

After his deployment to Iraq, Marty Glenn was selected as the CSM for 500th Military Intelligence Brigade in direct support to United States Army Pacific. While in this position, the 1,500 Soldier Brigade supported the Global War on Terrorism in the Philippines, as well as numerous exercises throughout the Pacific Rim.

Marty Glenn retired from the Army in June 2009 after 30 years service.