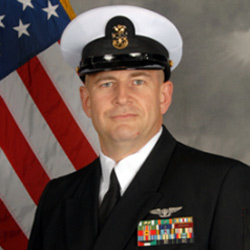 Hall of Distinguished Alumni - Class of 2004

CMDCM Michael Adam Lucas was born in Brasov, Transylvania, (ethnic Hungarian) Romania. He immigrated to the United States in March, 1975. Master Chief Lucas joined the Navy after becoming a US citizen in Sep 1984. After eight months of DEP he began Boot camp on May, 13, 1985 (on his 22-nd birthday). He went on to complete EBAT, BEE, AVA, and AFTA all in-service schools for ATs. He received H-3 FRAMP training at HS-10, June to November of 1986.

His first official command was HS-16 Nighthawks NASNI. This was a PRECOM and DECOM unit with CAG-10. HS-16 lasted less than two years. It was commissioned Sep 1986 and decommissioned May 1988. Upon the decommissioning of HS-16 he transferred to the HS-2 Golden Falcons. He served the Golden Falcons for four years and two WESTPACs one with H-3 Seakings and One with H-60F Seahawks. He advanced to AT1 at HS-2 and transferred to HS-10 CMT unit as the first H-60F instructor with fleet experience. In 1995 he was selected to CPO and he transferred to VAW-117 where he completed one WESTPAC and two Counter Narcotics deployments. He then transferred to COMHSLWP in1999. He was advanced to ATCS in 2000. Jan 2002 he transferred to the VAW-124 Bearaces in Norfolk VA. With the Bearaces fulfilled the roles of QAS, MMCPO/8300 and finally CMC. He was then transferred back to SoCal to the HSL-43 Battlecats, where he began as QAS and took over as MMCPO for over a year at which time he was advanced to AVCM. He then took orders to the best “L” class ship in the fleet as the AIMD Maintenance Master Chef and LCPO. He was selected to the CMC program while onboard the USS Bonhomme Richard. From Aug of 2008 to April 2011 he was stationed with the finest Sailors and Squadron in the Navy, the world famous HS-10 Warhawks. He now has orders to the USS Comstock LSD-45 he will be reporting there in May of 2011.