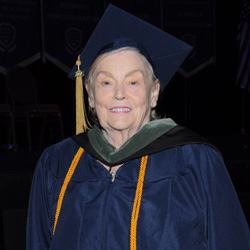 “Without commitment, you build roadblocks for yourself.”
Education History

Roberta was 88 years old when she received her Masters degree in Health Administration at Trident University. She was inspired to do so, when Tom Kablach, her husband of 68 years, developed dementia. She wanted to educate herself on the evolution occurring in the medical care of senior citizens. Roberta felt she could learn things that would help her take care of her husband. She chose a concentration in Health Informatics, she says, because it would keep her brain sharp.

She would like to express special thanks to Dr. Mickey Shachar for contributing to the realization of her dream to earn her degree.

Favorite Quote
“Professors at Trident believe in us, and encourage us, whether we are students studying in a war zone or an 80-some-year-old woman writing papers from her husband’s hospital room. We appreciate their support and guidance for our achievements.”