Home Articles HOMELAND SECURITY BY SEA, BY AIR, BY LAND

HOMELAND SECURITY BY SEA, BY AIR, BY LAND 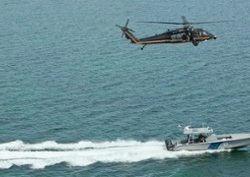 Today, we are indeed all linked to each other by the Internet; we are using smartphones, tablets, laptops, and desktop computers. The Internet and digital data sharing, is not designed to be secure but to be open and accessible. Accessibility however, comes with threats, risk to data, risk to infrastructure security, and risk to system’s controls. The phrase cyber threat has become our reality.

By sea, 90% of the goods transported around the planet are by oil tankers and container vessels that travel our oceans (Wagstaff, 2014). The ships’ crews get smaller and ships get larger as we focus technology on automation, remote monitoring, and navigational systems, these can be cyber attacked. Researchers from the University of Texas verified that it was possible to change a ship’s direction by simulating a GPS signal to target a ship’s onboard navigation system (Schmidt, 2015). Somali pirates are surfing the Internet for information that can help them with targeting vulnerable and valuable ships (Cyber; Information Security; Crime; Maritime, 2016). Pirates have the ability to access databases, which gives them access to a ship’s blueprints. Once they have the blueprints, they know where the ship is headed and what cargo is on board. (Klöcker, 2016).

By air, there have been a growing number of cyber-security incidents reported in the aviation industry. Aircraft technology was not designed with cyber-security in mind and hence is vulnerable to attack. Connectivity while flying includes satellite-based communications, navigation, and surveillance systems, and this risk is multiplied at the rate of speed modern airliners fly. Aviation commercial reality with on-plane public Wi-Fi, granting passenger public access; the risk becomes substantial, exposing such vulnerabilities never before imagined (Millman, 2015).

By land, with cyber-attacks against the U.S. electrical grid, both the DHS and the FBI have started to warn of the dangers faced by U.S. utilities from damaging cyber-attacks, such as the recent hacking against Ukraine’s power grid. Adm. Mike Rogers, who is the Director of the National Security Agency, said in a speech March 2. “It is only a matter of the ‘when,’ not the ‘if’—we’re going to see a nation-state, group, or actor engage in destructive behavior against critical infrastructure in the United States (Pellerin, 2014).” No electricity and our world changes dramatically, homes, or businesses do not come equipped with outhouses, and hand pumps for the well. Our current population does not have the knowledge or instruments needed to cook from scratch and without electricity, or how to grow or raise their own food.

Dr. Pietro “Pete” Savo is a professor in Trident’s College of Health and Human Services.