Home Articles ONLINE LEARNING IN THE EARLY DAYS AT TRIDENT

ONLINE LEARNING IN THE EARLY DAYS AT TRIDENT 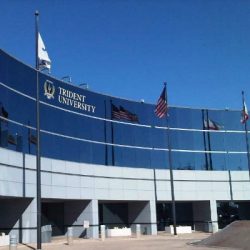 Joining Trident University in 1999, about one month before we opened our doors for business, was like stepping into the wild west of technology and teaching. We had a plan, we had a detailed model to help guide the University, and it all conceptually was perfect. But actually making it happen, three, and soon five, faculty members (with maybe 9 students at first) getting our hands dirty and trying to figure out what would really work technologically, pedagogically, so this vision of quality education could be realized at Trident, well, they were days that will never come again.

The sense of play in a startup organization is unnerving but fabulously exciting. And as our Director of Instructional Services I made sure we played hard until we came up with a routine that really worked for the Trident students. Technology was always the main challenge. We were always about solving problems with ideas, not wasting money on shiny metal objects; the pedagogy always drove the choice of technologies.

At the outset we were at the cutting edge, while our customers at times were slogging along with 28.8k modems. We could not be as aggressive online as we wanted since students could not download on slow modems; Trident moved to CD-ROMs FAST. I can’t count the number of courses I developed for CDs in the early days, and I got a world class education in the process! The learning, from creating video lectures to developing cases and searching background information, in such a diverse range of courses, in business administration, health sciences, and general liberal arts, is any professional student’s dream.

Early on, Trident contracted with Horizon Live to do live two-way conferences but the technology was typically only used by corporate types for occasional meetings once or twice a month. We did so many live meetings that we crashed HL’s servers in Denver repeatedly, twice in one day I recall. They finally put in enough servers to take care of us; we got their attention!

As an example of the evolution of Trident’s technology in the earliest days, a student would e-mail in a paper, we would then track changes on the paper, save it and send it back. Then the professor would create and record grades on an excel spreadsheet and eventually send the spreadsheet by e-mail to be manually entered by registration. Aside from being awkward, it was difficult to have proper oversight of the feedback and grading process. Oddly enough, a decade later, this would still be considered state of the art at many schools.

However, Trident rapidly developed our web based learning management system called CourseNet, where students at upload their work and get feedback on one web page, while automatically interfacing with registration and other data bases. Quality control is a snap. This still seems like a miracle to me.

Out of nowhere military students started showing up at Trident and we very quickly bonded. Personally I knew that military people were the perfect students for us when one soldier told me “Doc, we are pushing into Falluja and it is getting ugly; I might be a bit late on my papers.” Chuckling, but concerned, I said, “stay in one piece and we’ll take care of it when things calm down, hooah.” Two days later I get an e-mail “GREAT NEWS Doc! I just got shot in the leg twice and I’m in hospital–all my work will be in on time!” Soldiers. Of course, it is vastly easier to teach an over achieving perfectionist to calm down and give it his or her best than it is to teach a non-motivated student to want to learn.

After 25 years of teaching I can say that, nowhere have I felt more in tune with pedagogical practices from day one, more supported as a teacher, and more in agreement with an ‘ethic of care’ that allows Trident not only to put the student first, but to create a true “community of learners,” where professors and students are free to learn together with the complete support of administration and staff.