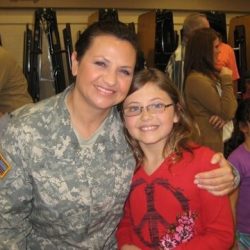 We’re all faced with challenges in life, some greater than others. For me, it was balancing duties as a single mother and serving in the the United States Army. While my children were my number one priority, my career could not take a backseat.

As my children grew, so did my responsibilities in the Army. I was faced with promotions, the possibility of deployments, transfers, and much more – the same as my fellow service members. But no matter the situation, the well-being of my children was always at the top of my mind. They factored into every decision I had to make.

While raising a family has been a wonderful, rewarding experience, doing it on my own was very challenging at times. My military assignments often required me to report very early or sometimes stay very late, so of course I had to arrange daily child care. Additionally, if I was called away on TDY (temporary duty), the care of my children needed to be arranged for a much longer period of time.

While single parents have a family care plan for deployments, that didn’t cover my typical day-to-day schedule. Having a strong network of friends, family, and co-workers is a necessity. There were times when my kids had to go to work with me when sick because there was no other choice or – much to their disappointment – they had to be up at 4:30 AM to go somewhere to be watched when I was in recruiting.

There were a few times I had to call family or friends for help because I couldn’t leave work in time to get them from school or day care. And there were times when I had to have a college student serve as a nanny when I was on TDY.

Over the years I learned that my time in the Army wasn’t just my career – it was their career as well. They were affected by all of my postings and each of my career decisions. I also quickly learned that I couldn’t do everything by myself, and the support system I had was invaluable. At times family was able to help, but other times I was supported by co-workers, people I met at church, and friends.

With some help along the way, I was able to balance my career and raising my children. In the end, though, my kids took priority, as I declined to be looked at for a final promotion. Although there were benefits to continued professional achievements, nothing was more important than the well-being of my children.

Deena Mullins is Trident’s Regional Manager of Strategic Military and Community Relations for the South Central Region. She is a 25-year veteran of the U.S. Army and earned an MBA from Trident in 2010.