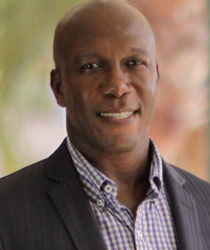 “Trident University represented the foundation of my success and it was the infrastructure that allowed me to be catapulted to where I am now.”
Education History

D. Wayne Robinson is a Trident alumnus, having earned a Bachelor of Science in Business Administration in 2010, and has enjoyed a varied and remarkable career. He climbed to the rank of Command Sergeant Major as a member of the U.S. Army and earned an MBA from the prestigious Booth School of Business at The University of Chicago.  Robinson is currently the President and CEO of the Student Veterans of America, based in Washington, D.C.

Robinson’s distinguished military career saw him earn more than 39 awards recognizing his professional skills and valuable contributions in multiple units. He has held leadership positions in Artillery, Special Operations, and Recruiting and graduated from every enlisted leadership course offered by the Army. He has been recognized for actions taken during combat including the Order of Saint Barbara, the Glen E. Morrell Medallion, and the Meritorious Service Medal (6th award), and has served in more than 12 countries around the world.

Additionally, Robinson was a partner and head of New Business Development at Drexel Hamilton Investment Partners. His financial knowledge and keen ability to communicate with investors played a key part in the rapid growth of the firm during his tenure there.

During his time as an MBA student, Robinson was part of a team that won the Global New Venture Challenge, a top international business competition. He has attended New York University in order to broaden his knowledge of investment banking. Robinson is a graduate of Wall Street Warfighters, a program that helps high-potential veterans of the U.S. Armed Forces transition into finance roles. Robinson also holds FINRA Series 7 and 66 licenses as well as a Black Belt Lean Six Sigma certification.