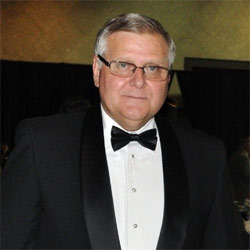 Dr. Hoff retired in 1993 as a U.S. Air Force Colonel. He was a command pilot, an unconventional warfare and terrorism expert, and a residence graduate of the U.S. Army War College where he served on the Eisenhower Academic Outreach Team. He participated in and was director of Crisis Action Teams from Air Division to the Joint Staff level during periods of crisis and war. He served as Director of Operations for the United Nations Special Commission on Iraq (UNSCOM), and as a consultant to the Republic of Korea Joint Chiefs of Staff on Air Special Operations and Counter Infiltration. He was a participant, planner, and director for humanitarian airlift support nationally and internationally. Each of these positions and activities combined with his academic background (two master’s degrees, one master’s certificate and a PhD) firmly established his experience and capability in understanding the paradigm of National and Homeland Security.

Dr. Larry Hoff, one of the most respected and revered members of the faculty at Trident University International passed in 2011 after a long illness. He taught at Trident University for over eight years and was one of the faculty members most responsible for driving the success of our program in Emergency and Disaster Management. He brought a wealth of knowledge and experience to TUI that is unmatched.

Larry was passionate about education and mentored and counseled many teenagers, young adults and members of the military regarding their careers, opportunities in the military and furthering there education. He was selected twice as a “STAR” teacher.

He initially devised and developed a supporting course for the emergency management Master’s level curriculum in “Combating Terrorism.” In the past eight years, he has instructed twelve master’s level courses and one undergraduate course. The gambit of Emergency Management Master’s courses varied from his Combating Terrorism course include introduction to Emergency Management, current issues of terrorism, Bio-Terrorism, Emergency Planning and Methodology, Occupational Health and Safety, Disaster Relief, Psychosocial Aspects of Emergency and Disaster; and Emergency in Education.