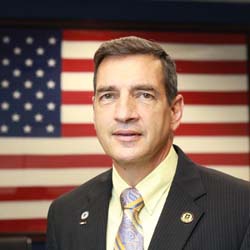 In his new role, Johndrow will directly oversee and manage Trident’s geographically dispersed Regional Managers, as well as lead the continued growth and development of the Trident Military Assistance Center, which launched in June 2015.

In addition, Johndrow actively presents for military and corporate audiences, speaking on topics such as critical thinking, leadership development, and the value of military veterans in the corporate world. He is a member of Centurion Military Alliance, The Association of the United States Army, and The National Historical Foundation.

CSM (R) Johndrow’s work during his time at Trident has been exemplary. He is a seasoned leader who understands both the military and veteran student needs and understands the importance of education for all.Esmeralda Silva, Vice President of Outreach & Strategic Alliances

Trident, a 100% online university that has been in operation since 1998, is regionally accredited by the Senior College and University Commission of the Western Association of Schools and Colleges (WASC). Active duty military, veterans, National Guard, and military dependents make up 79% of the University’s student population, and Trident is proud to employ many veterans at its faculty, staff, and management levels. Of Trident’s 32,000 alumni, more than 27,000 have a military affiliation.